Teams from each club will ski against each other in 2 races: a Giant Slalom and a Super-G. In addition, the host club is encouraged to run a wide parallel slalom. The parallel slalom, will be run for fun and will not carry points for the Championship (teams for this event can be drawn from each club and they should be mixed).

The Giant Slalom and the Super-G will constitute the Championship and will have equal points and will be run in accordance with the following rules: 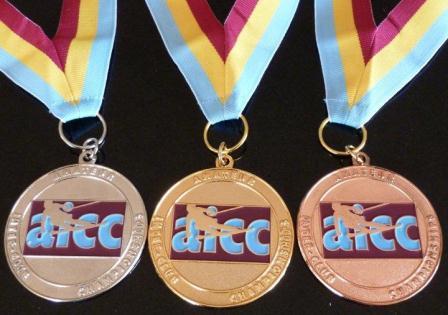 For GS: The times of the 3 fastest skiers in first run and the times of the 3 fastest skiers in the second run are added together and then divided by 2 to get the average. For each category, 100 points are awarded to the winning team and each team thereafter is awarded 100 multiplied by the percentage difference. For example, if team 1 is the winner with a time of 60 seconds, they get 100 points and If team 2 have a time of 66 seconds (ie 10% more) they get a score of 110.

For Super-G: The times for the 3 fastest 3 skiers for each team are added together to give the team time. Again, 100 points are awarded to the winner everyone else is scored the same way as in the GS.

The points for the 2 events are added together to get a total team score (it would be possible just to add the times of the 2 events together, but be rebasing to 100 each time it makes sure that both events are of equal importance).